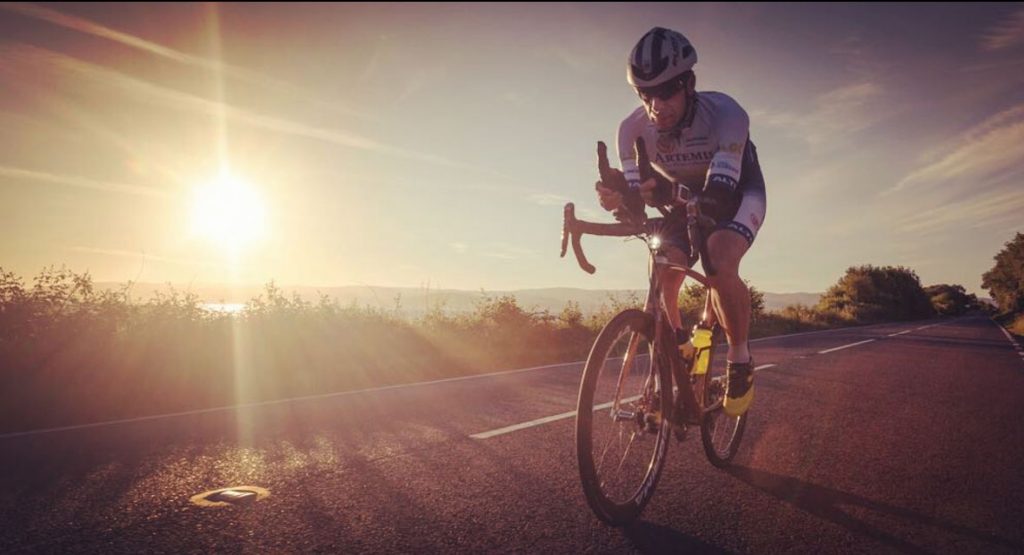 Sunday 2nd July 2017. Ultra-endurance athlete Mark Beaumont has today (Sunday 2nd July) set off on his record-breaking attempt to cycle around the world in just 80 days. In 2008 Mark successfully cycled around the world in 194 days, this time he will attempt to do it in less than half the time.
Inspired by Jules Verne’s classic adventure novel Around the World in Eighty days published in 1873, Mark will attempt to circumnavigate the globe over 144 years later by bicycle rather than balloon as he embarks__on the Artemis World Cycle.

Mark departed from Paris at 04:00 this morning, making his way towards Poland en route to Beijing through Lithuania, Russia, and Mongolia before cycling between Perth and Brisbane in Australia.
In New Zealand Mark will head for Invercargill and Auckland with the fourth leg of his challenge taking him between Anchorage in the United States and Halifax in Canada. He will attempt to complete his journey by cycling from Lisbon back to Paris with the aim of arriving by Thursday 21st September.

Mark comments: “This is my chance to shoot for the stars and take on the ultimate endurance cycling challenge. Since I last pedalled around the world nearly ten years ago, there has been a growing desire in me to push the boundaries of what is possible and to retake the circumnavigation World Record at a whole new level. I know what I’m getting myself in to, this will be the toughest challenge of my life and will be an immense physical, mental and logistical battle before I reach the finish line.

“I have spent the last three years creating an amazing support team, who are in charge of my nutrition, logistics, navigation and safety, allowing me to purely focus on my performance and being an athlete. I don’t think anyone has ever tried to go this fast and this far before and I have been building on my experience as an endurance rider over two decades to prepare for this journey”.

He will use the Panaracer EVO3 Race D tire for the attempt. The tire is known for its longevity and durability, while maintaining the low rolling resistance needed for such an attempt. Riding for 16 hours and roughly 240 miles each day for 80 days, Beaumont will test Panaracer Tires in the most extreme conditions.

Using Panaracer Tires for the record attempt is confirmation of the faith that Beaumont has in the product. Jeff Zell from Panaracer is excited to see the attempt unfold, “That Mark chooses to use our tires is testament to what we’ve known for a long time; our tires are reliable across a huge range of conditions, and will provide everything Mark requires to successfully take on this audacious challenge”
In the run up to his world record attempt, Mark completed a 3,300 mile training route around the British coastline in April, setting the pace for his bid to break the around the world record. To successfully complete the challenge, he will be required to cycle for 16 hours a day, which is 240 miles for 75 days.  The remaining five days allow for two days contingency and flight time.

The Artemis World Cycle has partnered with Twinkl to create lesson plans and educational material for primary schools across the globe.  Mark also aims to raise £10 for every mile cycled, a total of £180,000 for Orkidstudio, a humanitarian architectural charity which he has worked with for the last decade.  Sponsorship can be by texting ‘ORKD80 £10’ to 70070 or online at justgiving.com/fundraising/markbeaumont-80days
Beaumont has secured international corporate sponsorship from brands including Artemis Investment Management, LDC, Cardtronics, Koga, Altura, Panaracer, VisitScotland, Menzies Aviation, Hiscox/Bikmo, 80 DAYS Digital, Muckle Media, and Thorntons Law LLP.

Keep track of Mark’s progress via the website and social media channels which will be regularly updated as the journey progresses. www.artemisworldcycle.com

The Artemis World Cycle is an extraordinary challenge to be undertaken by British long-distance athlete, broadcaster and ambassador Mark Beaumont. The journey which starts from Paris will on completion qualify for a Guinness World Record, taking 43 days off the current world record which stands at 123 days. Keep track of this incredible journey via social media:
Twitter via @MrMarkBeaumont
Facebook via MarkBeaumontAdventures
Instagram via mrmarkbeaumont